The Tahquamenon In Spring

Today, the temperature has reached 51 degrees in Paradise, Michigan. The total amount of snowfall for the season is approximately 140 inches, some 80 inches less then last year's total snowfall.  A lot of snow and ice has been melting, the Tahquamenon Upper Falls is preparing to awaken to spring! 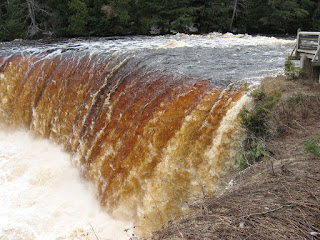 There is never a bad time to capture an image of the Tahquamenon Upper Falls.  But the experience of the Upper Falls in spring is exhilarating.  The Anishinaabe, the original people to the area, declared the winter season as a time of rest for the earth and a reflection for people.  Spring is a rebirth through plants and wildlife, while for people, there is a new beginning.
When you arrive at the Tahquamenon Falls State Park, Upper Falls entrance, park your car, and start walking toward the falls, you will hear the falls as you approach the public bathrooms on the south west corner of the parking lot.  If you are jamming to some tunes on your earbuds, you might not capture the sound but if you've been quiet, reflective over the winter, you will HEAR the falls.   You still have a little less then a half mile to walk along a paved walkway to reach the upper falls. But you will hear roar of the increased volume of water cascading over that 50 foot drop, a testament to the earth's rebirth. 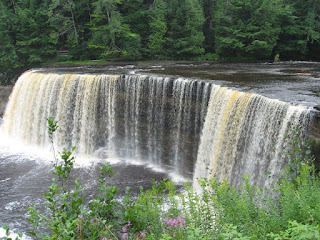 The Tahquamenon River is a 94 mile long, blackwater river in the Upper Peninsula of Michigan.  It drains approximately 790 square miles into Lake Superior’s Whitefish Bay.  The color of the river, a deep shade of root beer is due to the large numbers of spruce, hemlock, and cedar tree roots within this basin.   The Tahquamenon Falls State Park spans 50,000 acres within this region.  Navigating the changes in elevation, the river encompasses six falls: The Upper Falls, the second largest waterfall east of the Mississippi and spanning nearly 200 feet across and a series of five smaller falls cascading around a small island. The Upper and Lower Falls are separated by four miles.  The water flow is more than 50,000 gallons of water per second. 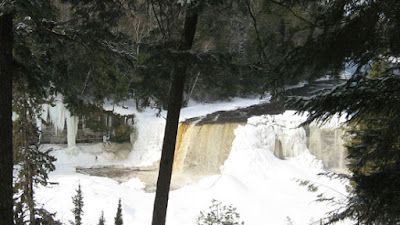 The Tahquamenon band of Ojibwe spent their winters close to Tahquamenon Falls as shared in Jan McAdams Huttenstine’s book, Remotely Yours.    Images of the falls in winter with its ice stalactites are a spectacle that can’t help but cause you to wonder how they could have possibly survived such conditions. While the view in winter is breathtaking, experiencing the mighty Tahquamenon River as it roars to life in the spring is an experience you will never forget!